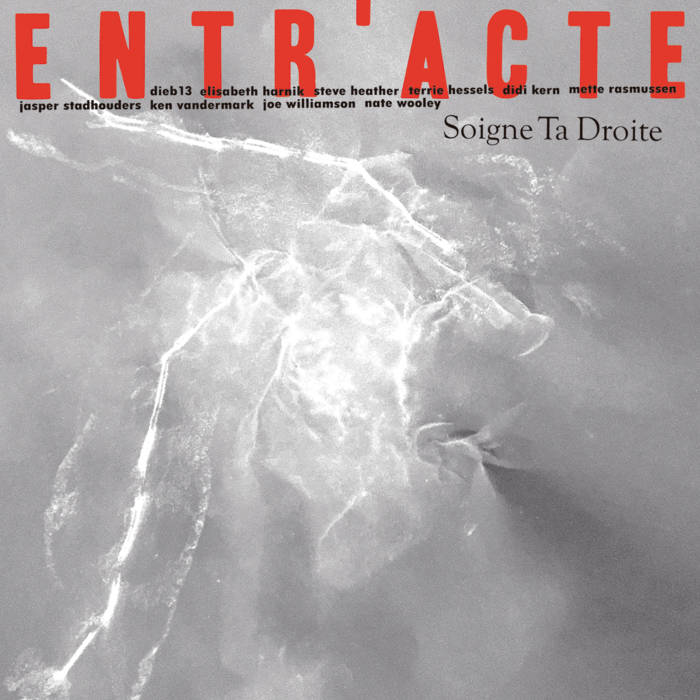 The material was recorded in March of 2018 at the Artacts Festival for Jazz and Improvised Music in St. Johann, Austria, during a performance that garnered a standing ovation from the audience. Soigne Ta Droite includes all the music performed on that occasion, three long-form compositions that highlight the innovative characteristics of the musicians involved and which focus on large scale group interplay.

The release of Soigne Ta Droite coincides with the appearance of Entr’acte during Ken Vandermark’s residency at the Krakow Jazz Autumn in October. This new group builds on the knowledge Vandermark has gained through his long term passion for large ensembles and composing for them. It’s a thread of creative activity that goes back for more than two decades and includes performances and recordings by the Peter Brötzmann Chicago Tentet, the Territory band, the Resonance Ensemble, and Audio One.

Without question, the release of Soigne Ta Droite by Entr’acte will be an event. The CD is going to be issued in a limited edition of 500 copies, orders are being taken now in advance of the album’s official release in October.

Music recorded live in concert by Karl Wienand and Markus Massinger at the Artacts Festival for Jazz and Improvised Music, March 11, 2018. Mixed and mastered by Dave Zuchowski, One Room Studio.

Thanks to to the musicians; Hans Oberlechner, Karin Girkinger, and the entire crew who worked at the 2018 Artacts Festival for Jazz and Improvised Music; Žiga Koritnik and Petra Cvelbar; Sam Clapp, Fede Peñalva, and Joel Villafañe for their assistance at Audiographic Records; and to the listeners.

Special thanks to Karl Wienand and Markus Massinger for their extraordinary sound assistance during a week of rehearsals, throughout the Artacts Festival, and in recording the Entr'acte performance.